As I fumbled through the dark to the tent where race packets were being handed out, it struck me how woefully unprepared I was for the day. All around me runners were toting large, plastic tubs filled with supplies for the day: bagels, tortillas, extra gu, instant coffee, spare socks, backup shoes, shirts, bandannas, glide, live chihuahuas…I don’t know exactly what everyone had but looking at my pathetically under stuffed drawstring backpack I had to grimace. What a rube, thinking I could run more than a marathon with a spare pare of socks, a bottle of diet Dr. Pepper, and a jug of neon yellow Gatorade. Backpack “secured” on the tarp (trail runners are a remarkably trusting group) I headed back down the road to my car to warm up a bit and drop off my newly obtained race hat. Oh the shit we do for a $1.50 trucker cap.  Tripping over a rogue tub of Vaseline reminded me I’d completely neglected to apply any skin protection before I dressed, yet another rookie mistake that I knew I would pay for later. It also reminded me it was dark as hell and I should probably switch on my flashlight to prevent any kind of actual tripping related injury, but being COMPLETELY AND UTTERLY UNPREPARED I hadn’t charged the thing so I couldn’t waste battery on walking to my car. I had dark trails to contend with.

Arriving, uninjured, at my car I discovered I’d left the dome light on. Disaster averted. If my car had been dead at the end of the race I’d have probably just cried. And then lived in my car until someone noticed or I died. Whichever came first. Warm at last I considered what I was about to do. My loose goal was to run a full 50K, a distance I did not actually know the full mileage of not being well versed in the metric system (later trail running math revealed to me that a 50K is a 5K/3.1 miles times 10…I felt very, very dumb). I set this goal despite not having run more than 10 miles in one go since Superior back in early September because I enjoy challenging myself. I knew realistically this probably was not going to happen. My stomach was already in a bad place from taking my carb loading a little too seriously. Gastric distress, in combination with my grievous lack of preparation,  and I settled on the goal of just making it through 3 loops.

A bit on the course itself. Icebox 480 is timed trail race in River Falls, WI. The goal is to run as far as you can in 480 minutes, aka 8 hours. There is a 7 mile loop of what I would consider semi to fairly hilly terrain that you run until you get towards the tail end of the time. Then you have to decide if you want to try for one more full loop or start running the 1 mile loop until time is up. Wherever you are if you’re still on the course when the whistle blows at 8 hours, that loop doesn’t count for squat. Cold.

Happy, having given myself permission to drop out at 3 loops, I forced myself out of my car, carefully checked the dome light was not left on again and returned to the start line.  The single track start made for quite the conga line of runners and resulted in a good bit of walking until the clumps of people broke up. I don’t know if it was the multitude of bouncing  flashlights or my body still fighting to digest about 7,000 calories worth of tortellini and bread sticks from the night before, but I felt completely disoriented and almost dizzy. Never a good sign.  I also felt incredibly hot because I’d worn so many layers including a vest over my long sleeved tech shirt AND a fleece jacket. Seriously, you’d think I’d never run in my life. Thankfully the trail looped back past the starting area before meandering off into the remaining 6 miles so I was able to drop a layer. One disaster averted. After that the terrain got slick. Snow had fallen the day before and melted leaving behind a thick, greasy layer of mud. I could feel all the muscles in my feet and ankles working as they dug in to keep me from slipping. There were enough rocks and roots to make the trail tricky and interesting without being insane. My comparison, however, was Superior which I found to be incredibly technical so I may not be giving the trail due credit.

The back half of the course is a bit hillier but not as muddy, with a lot of switchbacks that started making my IT band bark. Loop one was a light stabbing in the side of my knee. Loop two made it worse and I considered forgoing loop 3. I, of course, ran loop 3. 21 miles. At the aid station I made a deal with myself; if I finished the third loop by 12:30 and not a minute more I’d go for a fourth. Strict time cut off. If not, I’d call it a day and bow out gracefully with only minimal cursing.

I rolled in at 12:28. Two minutes to spare. I couldn’t go back on my word to myself! With 3 hours to finish I could walk the majority of it with little risk of running out of time. My mantra the whole time had been “run what you can, walk what you must”. Let’s just say the walking was a must more frequently in that final loop. At one point I convinced myself that they had taken down the aid station because I thought I’d gone farther than I had. I also could have sworn I saw a monkey on the trail. It was a tree stump. Suffice it to say lap four was not my best lap. I hobble-limped the last 2 miles and swore I’d not go a step further once I passed the tent.

2:30pm. It was killing my how close I was to a full 50K. 28 miles…so close. Would I regret it if I didn’t at least try? By then my knee felt wrecked but I also knew it was the kind of hurt that’s painful as hell but not actually damaging. Really I wanted an excuse to stop and that was the best one. Back and forth, back and forth I went with myself, sitting on that blessedly dry tarp and sipping on my glorious Diet Dr. Pepper (no, this is not a sponsored post. I have an addiction). Then I saw my friend Alena run in (I’d met up with her for the first 3 miles on I think the 3rd loop but then we lost each other). She was ready to start one mile loops and as I have major running FOMO I felt the irrational pull to join her. She’s also remarkably good at convincing people to do stupid running related things like sign up for a 50K with virtually no training and only a week to race day. So I hauled my happy ass off the ground and started out with her. We only had to do better than a 20 minute mile for those last 3 and we would be 50K finishers.

31 miles. 50K. Everything hurts. I have a chafing spot on my back the size of a dinner plate (maybe not that big but I also can’t see it. It certainly feels that big). But I’m now an ultra marathoner and I can wholeheartedly say I’ve earned my $1.50 trucker cap. 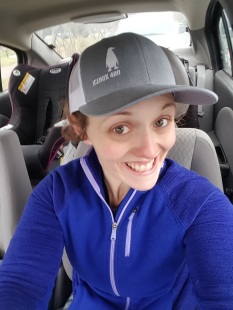 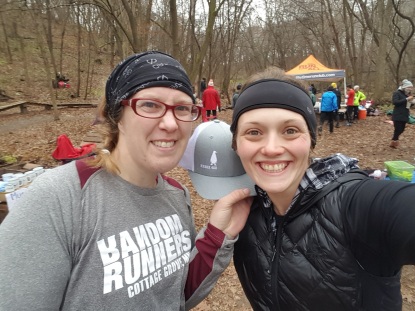 View all posts by emilu28